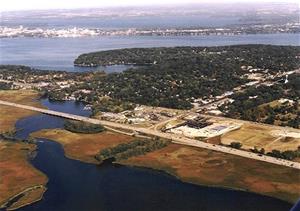 The City of Monona has a robust commercial / business sector for a city of its size. Rich with economic possibilities and public amenities, the city of Monona is home to roughly 8,000 residents.

With no additional land to annex, Monona is landlocked by Lake Monona and the City of Madison forcing the city to be creative with its space and planning strategy.

Today, Monona boasts to having over $25 million in development at the current time, and the city is thriving with new projects. Both of the city's two main corridors, Broadway and Monona Drive, boast recently completed and new projects

The Monona Drive corridor (shown at right), the City's main north/south thoroughfare, was reconstructed in three phases over four years.  The entire length of the street, from one end of the city to the other, was reconstructed with new roadway, medians, bike lanes, streetscaping, and lighting. This major project won several Project of the Year state and national awards.

The Broadway corridor features 121 luxury apartments in a multi-story building along with retail stores, and The Waypoint Public House. The development sits on a 5-acre lot along the Yahara River.  With the construction of this development, the City also upgraded the adjacent Lottes Park including a new shelter and extension of the Yahara Cove Boardwalk.

The City's latest project is a major redevelopment of 7.6 acres, including 880 feet of waterfront along the Yahara River, in the Broadway/Bridge Road area.  Read more about this exciting project...

All in all, the City of Monona has a thriving marketplace. We encourage you to check it out. View the Monona Business Directory.
Agendas & Minutes
Follow City Meetings
Online Payments
Select a Payment Type
Notify Me
Sign up for Notifications
Employment
View Current Job Openings
Forms & Permits
View Listing of Online Forms
Parks, Rec & Pool
Monona Library
98.7 WVMO
Senior Center
[]