Lockdown was the standard active shooter response method for many years, but almost every police officer in America has had a conversation similar to this with their children: “If you ever see someone with a gun other than mommy, daddy or a police officer, you need to run fast.”

Police officers know the volatile dangers of any aggressive intruder and active shooter event. These attacks can happen unexpectedly and produce devastating outcomes within a few short minutes making even the fastest law enforcement response-time futile.

According to the FBI’s 2014 report on active shooter situations, 69% of incidents lasted less than five minutes. Consequently, 60% of incidents ended before police arrived. Police officers understand the necessity of teaching proactive safety and response tactics to citizens. 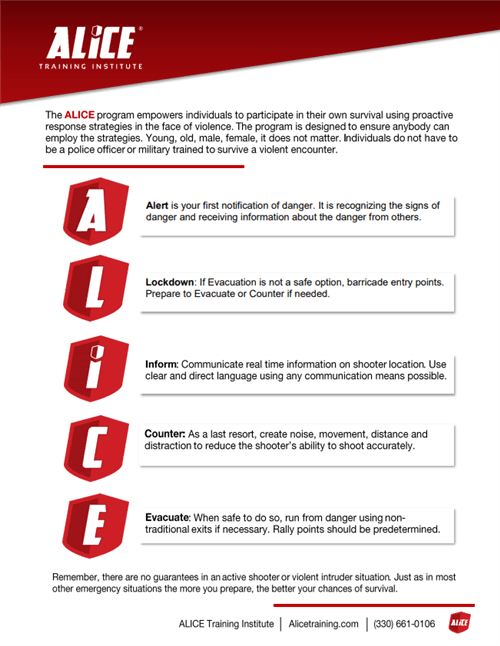 The Monona Police Department has sent several Officers to train as Civilian Response Instructor through ALICE.  The Monona Police Department has been offering this valuable training to civilians within the City of Monona. This training is available to any business, house of worship, school, or other venue located within the City of Monona free of charge as a public service.

We feel this training is maximized when civilians train in areas they are most familiar.  So we strongly encourage this training take place at your facility. If this is not practical, an alternate venue can be used depending on availability such as the Monona Library or Community Center.

Given the demand for this training, we will make every effort to accommodate as many requests as possible. If interested in this training contact Community Relations Officer Nate Reynolds and indicate your interest in the training.

See link below for a host of valuable ALICE Training Videos:

It can happen here

If you See Something - Say Something